This is turning to be a non-blog, but I will try to at least document where we slept and ate - there are other highlights too, so maybe... 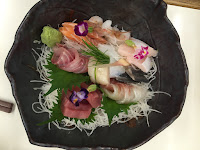 Thursday, June 2 - Yuval & I arrived at Narita and made our way to Odawara where Avi & Osamu met us at the train station (the pocket WiFi we rented was great!). We went to a simple restaurant close to the station where we ate great sashimi & sushi (we decided to forego its international menu...). From there to we continued to the first ryokan - http://www.resorthotels109.com/en/hakone-koushien/index.html . 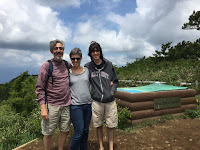 Friday, June 3 - had a nice buffet breakfast in the hotel, and then drove around Hakone. Took 2 cablecars (known here as ropeways) to some mountain tops (which were somewhat restricted due to lots of volcanic activity), rode a boat on Lake Ashi, visited a beautiful temple and had a mediocre ramen lunch. We more than compensated at our next ryokan - http://senkyoro.co.jp/english/ - which was beautiful and served a sumptuous dinner which lasted almost 2 hours. I crashed after the first 4 courses, and decided to fight the jetlag on my futon. The photos Avi took of the next 6 courses were beautiful... 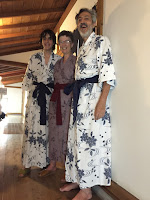 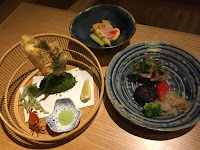 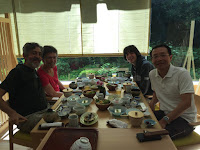 Saturday, June 4 - another sumptuous breakfast - this time it wasn't a buffet. We took a drive before that as Osamu thought we might be able to get a sighting of Mt. Fuji, and indeed we did - was fantastic. After breakfast we went to see the checkpost, an amazing fishcake factory and the Odawara castle, and then said goodbye to Osamu and took the train to Kyoto. We stayed the night at http://www.thehatanaka.co.jp/ which is very beautiful. We had a very giggly assistant with a very limited knowledge of English - she served us a huge dinner in our room - very Japanese, very good and huge... 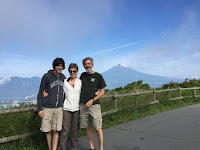 Sunday, June 5 - the assistant served another huge breakfast, and then we checked out and left our luggage at the ryokan and started wandering around Kyoto. Just as we remembered - mostly very ugly, with lots of beautiful corners, especially if you can get a glimpse behind fences and locked doors... Then we moved the luggage to the next ryokan - Kyoto Ryokan Kinoe, just around the corner, and slightly simpler and much cheaper (no meals included). Kazuo came there at 2pm and we went to a temple with beautiful gardens (in the next town over - 40 minutes away by subway). Then back to Kyoto and another huge dinner - was similar to the ryokan dinners but even better!


Monday, June 6 - finally a day with less food. Started with coffee at a chain Avi discovered - % Arabica - http://www.arabica.coffee/ - I think it's even better than Small World! Then a bus to the Golden Pavillion and the Zen Garden - as beautiful as they were! We took a cab to the Philosophers' Walk and were disappointed, but enjoyed a lovely soba lunch in a small place close to it... Walked back to town and spent a long time in the Nishiki Market. Okonimyaki dinner at Gion Tanto and off to bed!

Tuesday, June 7 - had our suitcases shipped to Tokyo. Assuming they arrive at our hotel there, this is a great service - we put a couple of essentials in our backpacks and embarked into the 'wilderness' of the Japanese Alps, but of course visited another shrine (1001 warriors) on our way to Kyoto Station. The station has an 11-floor mall attached to it and is huge. We spent the time waiting for our train wandering in its food court and collecting exotic and not so exotic food for the train ride and snacks for the track. We had to take 3 trains - each more local than its predecessor, but it's really easy to do this and understand where to change and how to find the next track. From Nagisa station we took a cab to our ryokan - http://tumago.jp/stay/shimomura.html . We are the only guests in this place and the landlady is lovely but knows exactly 0 words in English which makes our Japanese so much better than her English. Nonetheless we get along famously. We walked back from the inn to Tsumago which is an old post town on the old Tokyo-Kyoto highway. Everything was beautiful - very lush tall trees, deep ravines, lots of bridges over rivers of varying sizes and the town itself with its wooden house fronts. We did not expect much of dinner but it was surprisingly good - slightly less fancy than the ryokan dinners and simpler but lovely presentation. And with the added bonus that we did not feel over-stuffed at the end!

Wednesday, June 8 - breakfast at 7am - again an elaborate affair, but we tend not to start our day with meatloaf coated in ketchup - there were enough other things we were happy to eat. We left the nice lady and started the hike towards Magome - it was really beautiful - quite a steep very green path which is the best maintained path we ever saw. It was a bit hard to imagine carrying an emperor in his litter on this path... Magome is another post town and seems much more developed and lively than Tsumago but that may have been due to the fact we saw it before noon, while everything was already shut down in Tsumago the previous evening. We stopped in a cafe and ate ice cream sundaes and then continued to Ochiai, which has a train station. We had to wait an hour for the local one-man train. Then took a less local train to Nagoya and finally a Shinkansen to Tokyo. The trains continue to amaze! The hotel is completely western - http://tamachi.gracery.com/ and quite comfortable. And wonder of wonders - the suitcases did arrive from Kyoto! 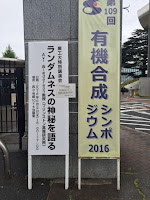 Thursday, June 9  - Yuval and I got up early and went to the fish market, but were rather disappointed. It was a dreary day and drizzled most of the time. So after excellent coffee we went to https://www.edo-tokyo-museum.or.jp/en/ which we found quite interesting. Lunch in Ropongi Hills with all the expats, a spot of shopping and then we took the train and went to meet Osamu and Avi at Osamu's university where Avi gave a talk. We went for another excellent multi-course dinner, and Osamu's assistant Kimiki joined us, we had a lovely conversation.

Friday, June 10 - checked out, went to see the Palace grounds, and strolled through Shiboya. We met Noriko at 3 and it was great to see her again after 17 years. They have a very nice house, and we had the basement to ourselves. After exploring the neighborhood we all went together to the most amazing dinner at http://www.kyubey.jp/en - I cannot imagine eating sushi any other place after that experience! No wonder Kyubei was written up in the WSJ. 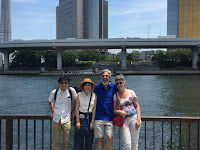 strolling in Asakusa, the Asakusa Shrine, and a loaches (small river eels) lunch at Dozeu Lidaya (https://www.tripadvisor.ca/ShowUserReviews-g1066461-d1677066-r183358769-Dozeu_Iidaya-Taito_Tokyo_Tokyo_Prefecture_Kanto.html). Despite their looks they were excellent! Then on to a street parade and a street fair which were amusing (after buying some kitchen knives). Was a tiring day, which we tried to recover from on the long flight home on Sunday. 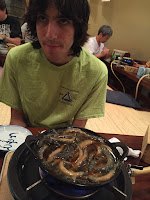 Was a wonderful trip. Japan - we will be back!

Posted by Avi and Edna No comments: